My Love for You is Like a Truck! Berserker! 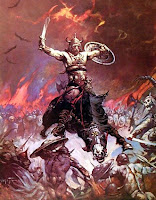 What is not fun about berzerkers? Jeff over at Jeff's Gameblog describes them as psycho-killers:

“Psychokillers” is my term for stock berserkers, by the way. When encountered in dungeons I tend to describe them as axe-wielding maniacs from slasher flicks, rather than as Vikings. “You open the door and waiting for you on the other side are two Jason Voorhees and three Leatherfaces. They attack.”

And I agree. I think the guys in the monster listing probably should be just "psycho-killers", but what about characters with a legitimate battle rage?

In the past numerous classes are have been written to allow player characters some kind of battle rage ability. White Dwarf and The Dragon both had Berserker classes back in the day; and the rage ability also appeared with various Barbarian class builds.

This house rule is based on the LBB and B/X monster entry for a Berserker. I figure that a +1 to hit points indicates that they have a Constitution bonus. The +2 to attack is clearly from the rage. And uncontrollable rage is not a trait of the the lawful, so... here's the rule:

If Chaotic or Neutral, Fighters with a Con bonus can be berserkers. They get +2 to attacks but loose the ability to separate friend from foe. The berserk character will attack the nearest entity that might pose a threat to anything. If they are attacking a friend or ally the berzerker's player rolls 1d20. If the roll is higher than the friendly target's Charisma they don't separate friend from foe and the friend is attacked. A Berserker can go berserk a number of times per day equal to their Constitution bonus.

Posted by Steamtunnel at 8:40 PM

Heh yeah as a new player we went to the gatehouse of the Temple of Elemental Evil or whatever and "eek, berserkers!" We were too new to be jaded and were like "Who the f*ck are these guys and why do they just live here and want to kill? WHY????"