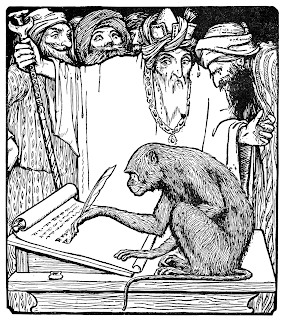 It is known that monkey scribed scrolls are the most potent.* This spell allows a magic-user to use a monkey (specifically a non-human great ape) to scribe mundane and magical writings. For spell books, a monkey scribe will copy the spells from a spell book to another as if they were the magic-user themselves, freeing the magic user for other tasks. The monkey becomes capable of understanding and speaking to the caster (with the casters intelligence and 25% of the time the casters personality and memory) for the duration of the spell and will calmly and diligently pursue his duties until finished. For scribing scrolls the monkey counts as the caster by proxy. The caster must be able to make the scroll himself without the help of the monkey for the monkey to be able to scribe the scroll. Scribing the scroll in this way makes the scroll more powerful as they max out any variables and offer twice the volume, range, duration and area of the spell. A factor of the spell is not doubled if it is already maxed out (for example in the case of variable duration, the max duration is used, and is not doubled). Variant: A GM may decide that humans do count as great apes for this spell.

*This idea came from the comments over at this linked post over at Telecanter's Receding Rules.

As I submitted this to Raggi for his spell contest this sucker is OGL so feel free to read and distribute with credit due.
Posted by Steamtunnel at 7:10 AM 3 comments: 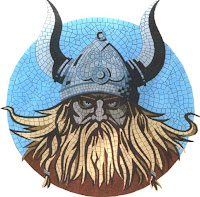 Yost is the god of bravery, drinking, and boasting. Often refered to as the "Yost the Boastmaster" or simply "The Boastmaster", he typically appears as a human or very tall dwarf in a horned helmet with a very large scraggly beard. His principle weapon is a battle axe but he has been known to show up with a sword or hammer. He is revered by all Dwarves and most humans who live in the north, have beards, and prefer to travel by long ship.

He is fond of valor and bravery, and most fond of the "heroic stupid" variety. Yost has been known to give a blessing to those that survive in situations where their worst enemy is their own bad judgment, for he believes that only the strongest can really overcome such a handicap. He is fonder of such attempts if a boast is first made about how they will overcome such odds, and even fonder if it is made while drunk. However, Yost is a god of action. In fairness he only blesses after the deed is done, in a degree to which the boast and brave deed were completed. To maintain the blessing the reciever must regularly boast about the deed that gained him the blessing at least once a day while drinking something; this is generally done as a toast to ones self and need not be an alcoholic drink. In the same fairness, Yost only permits one blessing at a time. Yost has a hate for the undead and his interests revolve around the riddle of steel, drinking, boasting, the number 7, the number 13 and the letter T.

Yost is known for two magic items that appear from time to time:

The Toast of Yost (Tankard of Bravery)
Once per day when filled with a liquid and drunk with a boast or a toast to bravery, this old dusty tankard bestows upon the drinker the blessing of Yost, the god of bravery, drinking and boasting. The entire tankard must be drained for the blessing to take effect. The blessing is variable depending on what is put in the tankard. Mixing liquids randomizes the effect. Liquids not listed below have no effect. The effects last for 5 minutes:

Mead: +10 hp
Cow's Blood(and roast drippings): +2 to hit and damage
Ale/Beer: +5 more hirelings can be hired for that day while in effect
Water: +2 to turning level and all turning rolls
Milk(of any kind): AC treated as better by one armor type, +2 to ranged attacks
Wine: Speak fluently one additional language, only this ability maintained by drunken state; All checks increase by 1 in 6 or 20%; Thief skills gain by 20%;

If one drink is shared between several drinkers (many can drink but a sip) over a turn (up to 13 persons) then the effect is +1 to attacks, damage and saves. It affects all those whom drank from the tankard with the effects lasting 5 minutes.

The Host of Yost (Bread of Bravery)
The host of Yost is a slice of aromatic bread toasted to a golden brown and wrapped in a white cloth. While in the cloth the bread continues to radiate heat no matter how old it is. When the slice of bread is unwrapped and eaten it grants the eater +2 to attacks and saves, immunity to fear effects, and 10 temporary hit points for 10 minutes. When 1 slice is shared the effect is the same as the Toast of Yost but for 10 minutes.

The Host of Yost is generally made by valkyries in their free time when they are on speaking terms with Yost and it is rarely made by mortals. On the rare occasions when this bread is found, it is found in very dangerous or very odd places. Should a mortal make the bread they must make an entire loaf of 13 slices, or rolls. Additionally the white linen wrappers must be washed in holy water or the magic in the bread will dissipate after 3 days.
Posted by Steamtunnel at 6:54 AM No comments: