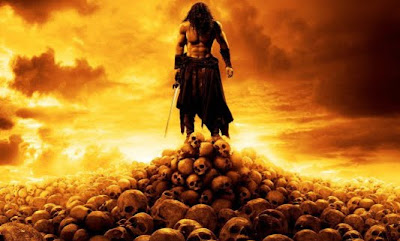 It has been a while since I have posted last. It has been a busy time. In that time the new Conan ...no wait, CONAN movie is upon us. As far as I can tell when I watch the trailer this looks like Bob's Conan to me. Mamoa sounds the way Conan is described to sound and like I thought Conan would sound, he dresses the way Conan is described to dress- from just clothes to full armor.

James over at Grognardia laments an absence of brutal hyborian age combat in favor of this films brutal balletic fight scenes. The thing about that is Conan is consistently described as having a catlike grace and it is this grace combined with his brutal strength that gives him his advantage in combat. That's from 2 Gun himself. He is Amra- the lion, grace and brutality wrapped up into one. Things -DO- explode in the hyborian age. See the battle at the end of Black Collosus where an incendiary is used to take out a line of cavalry. I believe a greek fire is mentioned in the later stories (Hour of the Dragon maybe?). The explosion we see in the trailer looks more like a molotov cocktail going off than say gunpowder as the explosion looks to me to be more like flaming liquid.

But enough of Grognardia. I really was ok with the films when they had Conan stating the line form Queen of the Black Coast: "I know this: if life is illusion, then I am no less an illusion, and being thus, the illusion is real to me. I live, I burn with life, I love, I slay, and am content." When I see movies or trailers for movies like this I often think about what Bob would think of them. My thoughts are that he would have eaten up films like Pathfinder, or Outlander. He would have praised LotR and Game of Thrones in cinematic and book form. Personally I think at the time he would have enjoyed the 1980's Conan on some level, but I think this one he would find fit his vision more closely.
Posted by Steamtunnel at 6:53 PM 1 comment: