How to Set Up a Sandbox Campaign 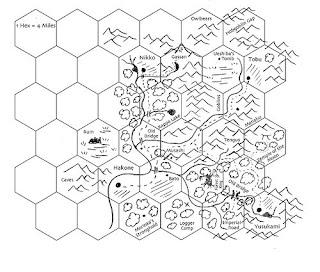 I have heard a lot about the article by Calithena in the magazine called Fight On! that talks about how to set up a sandbox campaign. I have not seen the article as my income is greatly demanded elsewhere (house, children, food, bills, etc.) But I figure it probably has similar advice as to what is written here.

Recently a friend of mine named Joey, asked how you practiacally set up a Sandbox campaign without spending a year in prep. This is the answer I gave my group when they asked:

Sandbox is OLD SCHOOL. Really old school, if you thought you were old school, you probably were not if you sort of feel bad when a player character dies (DM or player).

While theory is great Joey asked how it works out practically- which is where I am going to go. There is a lot of work on the front end, but not at much as you would think. The key I found when I did this in FR under 3.5 was to ABANDON ALL PLOT THREADS. The plot thread is the path that the PCs take as they move through the world. So you only really have one plot, the one that the players make out of the plot legos you have given them. That does not mean that the NPCs and the villains don’t have plans that they are work on. It simply means that their plans don’t become part of the plot until the players choose to make it part of the picture.

The random encounter works pretty well with this too. The key here is to keep in mind that there is no such thing as random encounter even if the encounter is randomly generated. They should always have something to do with the plot. So if you roll up orcs, they are not just random orcs, they are orcs that have a connection to something already going on. No connection is too unreasonable or tenuous. It just makes the plot thicker because the player’s minds will accept the clues you offer and build on it. Just use the ones from the nearby dungeon that has orc in it.

But we are still in the realm of theory. Let’s get practical.

Step 1. Get your map.
Draw your map on a hex sheet. 6 mile hexes work best (there is a whole math as to why this is the perfect hex size). You probably want to start with an area of about 65 hexes total or 7 hexes out in all directions from a center hex. Whichever way you go you need to set it up so that it will take about one session to get out of this starting area if the players decide that they are going to circumnavigate the globe. What really helps is if you have a product like
Points of Light or Wilderlands of High Fantasy or a copy of Fight On! #1.

Step 2, Get your adventures
You will probably want 5-8 adventures. Be careful in your selection. You want a lot of site based elements. So lets day you are running what we have set up- Aztecs in the pacific northwest. It probably wouldn’t hurt to grab right off the top of the classics pile and get Hidden Shrine of Tamoachan and Dwellers in the Forbidden City. That gives you two. Aztecs had pyramids so since we are 4e we go a grab Pyramid of Shadows, Its coastal so we grab the new Dungeon Adventure sea reavers of the shrouded crags and massacre at fort Dolor. There are a lot of lost cities in the whole Aztec thing so we grab Lost City of Barakus, and for the heck of it The Lost City Basic D&D module. No campaign is complete without 1) a mega dungeon of some kind and so we pick one that can adapt well to an Aztec feel – The Ruins of Castle Greyhawk and 2) a meat grinder or two so we throw in the frikken Tomb of Horrors, and what the heck Grimtooths Dungeon of Doom because both of these will be hard to access in any case, but its fun to have them around. Oh yeah and the adventure Rana Mor from Dungeon has a sort of Aztecish feel so lets put that on the map. And because we really want to have fun we throw in a truncated version of the Caverns of Thracia. It can have an Aztec feel to it if you want.

Step 3, Catalog your adventures.
I went a little overboard above. I picked 12. So I take all the settlements and home bases and towns and stuff and put them on the map somewhere. The weird thing is the Apophenia and Synchronicity will start to kick in here. These are the natural human capacities to find connections and patterns in senseless noise, they exist so you can find patterns and connections in things that are not senseless. As a DM in a sandbox these are your two favorite friends. If you want to know more, watch the wizard of oz while listening to Pink Floyds Dark Side of the moon (synchronicity) and read up on conspiracy theories, especially 9/11 (apophenia). In any case place the towns and such. Then place the “dungeon” parts. Next you will want to get something like the Ready Ref Sheets. These have really useful charts for really random things. A lot of these made it into the 1e DMG, but there are more that did not. One of the most useful is a series of charts that set up random stuff to find in hexes as players pass through. This really makes the world come alive.

Step 4, Get a Rules Light System
DO NOT TRY THIS WITH 3E. You will go insane and possibly get divorced. The monsters will kill your time. A rules light system is best. Retro Clones like Swords and Wizardry, Labyrinth Lord (using expanded classes), Basic Fantasy, OSRIC, Castles and Crusades, or Microlite 20 will probably be best. Also strangely enough, because of the contributions of Mike Mearls, 4e works with this style of game. It is pretty much all in how the monsters work. I would run with 4e or a Labyrinth Lord/OSRIC hybrid. Essentials are that you want to keep attachment to new characters to a minimum because the mummy’s tomb that the 2nd level characters decide to raid might actually have a mummy in it. 4e can work because it give the players enough stamina and tricks to get their asses handed to them by said mummy and then still live (barely) to fight it later when they have gained some experience and have learned how to kill a frikkin mummy. The system should allow for easy monster set up and modification. Like I said 3e does not have this and will eat your lunch in this regard. If the adventure says “mummy” and you know exactly what to put there, without any additional work, that is the system to use. On any modern game you will want to change the curve of experience. (except in 4e cause its alien technology) 10th – 14th level should be uber. To get the 4e equivalent divide by 2, a retro clone and 4e will play the same at equivalent levels.

Step 5, Extra Credit (Sandboxes within Sandboxes)
So that hex with the Hidden Shrine of Tamoachan in it? Its six miles across. That’s a lot of room to play. What you want to do is for each of the inhabited locations (towns/dungeons) set up things around them nearby to accentuate the location. This makes camping in the hex sort of interesting. And if you have to design a dungeon, make the dungeon a sort of smaller sandbox. This aspect of sandboxing is largely stolen from Mike Mearls at this post:
http://kotgl.blogspot.com/2008/09/borderlands-style-adventures.html

Nuff Said. And I would love to see that article.
Posted by Steamtunnel at 9:29 PM

Hi! Thanks for this post - i'll add it to my collection over on my Google Notebook for RPGs. You may also be interested in this post over at The Core Mechanic, wherein I link to about a dozen other articles about sandboxing and try to define what it is - because, it turns out it depends on who you talk to.

BTW - did you see the announcement of the RPG Blog Anthology? We are looking for submissions from RPG bloggers of their own blog posts and those of other blogs they love. We are also looking for people to volunteer their time to help, if you have any to spare. Check out the most recent announcement here.

Drop us an email at calithena at gmail dot com and we'll see if we can get you the PDF of Fight On! #1.

As I said in January, I'm honored that you picked my image for your blog. Please link it to my blog so that people know who made it and get the image at higher resolutions if they want it?

@Alex- Man that is one nice map. Thanks for letting me use it! I just found your comments, and so I will of course link to your map!

Calithena- its been about 9 months since you made your offer, I will email you and hopefully I can still take you up on the offer!

Man I need to check the comments more!

Oh, hey, my blog has moved. The links you used still redirect, but I don't know how much longer they'll work. The new links are: