Raziel of the Sack 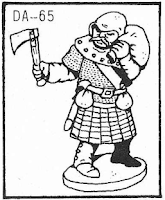 Raziel of the Sack (not to be confused with Bakshi of the Bag) is the patron god of Looters, Tomb Robbers, Burglers, Highwaymen, Pirates and senseless risk takers. Raziel appears as many different types of humanoid throughout the world. His symbol is a sack. Regardless of race he is traditionally depicted carrying a one-handed axe and a sack over his shoulder. Raziel is fickle. His avatars have been known to bless adventurers with the contents of his sack or curse them by adding an item of their to the sack.

Raziel always appears as a normal male of a humanoid race with a sack and axe. He typically wears armor and a helm or hood. While he may give or take from a person, he is not above bargaining. Though his price is high and he typically asks for women (esp a bargainers full grown daughter), wine, feasts, song, and other desires reflective of his worshipers of high and luxurious value.
Interactions are always random and are a 50/50 blessing/curse. Items from the sack are randomly determined and have twice the chance of being cursed.
If using an older game use the rules for a Storm Giant's bag.
In a newer game roll randomly.
The old school applicaitons of Raziel are obvious as are his 3e/4e magic item economy applications.
(Thanks to Jeff Reints for the ispiring image)
Posted by Steamtunnel at 11:31 AM

I think this guy makes a perfect god of theives. Great idea. Consider me a subscriber.