The Hexagon: The Symbol of a Renaissance

Why the Hexagon?
If there is one thing that best represents the Old School role playing movement/revolution/renaissance/zeitgeist/community/thing it would be the hexagon. D&D used hexes. So did Traveller. Role playing came out of wargaming and so it was the defacto way of representing the wilderness soldiers, explorers, and characters wandered through. All the early D&D campaigns used them: Greyhawk, The Known World, Blackmoor, and The Wilderlands to name a few. We can clearly say nothing says "Old School" like "hexagon" because "hexagon" says "war game." They work well for maps and breaking up an area to keep track of where stuff is, be it deep space or high mountains.

Where did it come from? Where did it go?
Pioneered for gaming by the RAND Corporation, the hexagon was picked up by Avalon Hill and found its way into the early days of role playing. Hexagons made gaming easier and made movement through trackless wilderness track able. My personal belief is that the removal of Demons and Devils from the game was not a reaction to the religious criticism of the era but rather an attempt to move D&D away from its wargame roots towards the storyteller railroad paradigm it had been drifting towards since the mid 80's. Get rid of Demons, Devils, Sandbox settings, "challenge the player", player-DM cooperative world development and hexagons and you could replace them with proficiencies/skills, railroading adventures, DM PCs, laundry quests imparted by Elminster, and sweet sweet pretentious drama.

What are their uses?
Hexagons are extremely useful for gaming. The right size of hex is great for judging distance. If you know the distance from face to face you can figure out the distance of each edge, the distance from the center and the distance from point to point. This allows you to figure out distance to a fairly decent ball park, especially if a DM uses a hex in hex system where hexes on one scale can be represented by hexes on another. The same system hexes in hex allows for cataloging the game world. If they are numbered a DM can keep a record of what is in each hex. This allows the DM to streamline his resources to develop only the places the players are going to go. The DM only has to provide detail when it is absolutely necessary but the players are not limited to a set path. If you use center to face and center to point you have twelve degrees of movement, not just six. Hexes help to generalize terrain. There are numerous other more subtle uses of the Hexagon.
Posted by Steamtunnel at 1:59 PM 6 comments:

Chim-Noamski the Talking Monkey; God of the Many Bowls 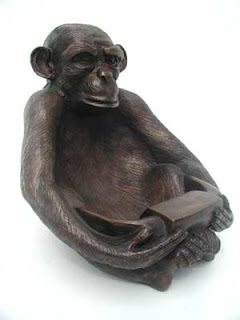 Chim-Noamski is the talking monkey god of language and civilization. Often depicted as a monkey with a bowl; he is the ultimate arbiter of the rise, fall, and direction of a civilization. His temples are covered in decorative chimpanzees with live ones everywhere. The temples are filled with nick nacks, whatever the monkeys decide to bring in. Much of the priest's time is spent cleaning up the offal created by so many animals. When they are not cleaning they are usually debating the merits of the latest divination from Chim, or acting as arbitrators in assorted disputes. Evil priests of Chim have been known to operate investment schemes which are ussually based on a false prophecy of future wealth of the community. These are known as Kanzi Schemes.

In each temple there is a large jewel eyed (typically blue jewels of value based on wealth of the community) monkey statue with a bowl. When the monkeys put something in the bowl it is interpreted as (and at times actually may be) a divination about the community (roll on divination chart). Sometimes minor prophecies concerning individuals are uttered by a random chimp in a temple (1% chance for each individual on each visit).

The Avatar of Chim (when he appears) is a blue eyed talking chimpanzee who is carrying a bowl. His bowl always contains many items. The items found in the bowl correspond to the cards in a deck of many things but the effects apply to the whole settlement where the temple is located.

Knocking or breaking the bowl off the idol will incite the rage of Chim and the murderous anger of 10d6 chimpanzees and 1d6 priests of Chim.

The divinations must be interpreted based on what was in the bowl. Before rolling on this chart the DM should create a d12 chart of random objects that the chimpanzees have collected in their temple that could turn up in the bowl, leaving the 12 blank. When a twelve is rolled on this chart it is a legitimate prophecy. The DM then should roll again to determine the item in the bowl.

The DM should then roll twice on the following chart. The first is the real meaning of the prophecy, the second is the priest's interpretation of the prophecy.