How Much Adventure in One 6 Mile Hex? 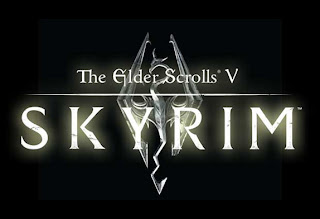 So last weekend wandering around PAX the one thing I would get excited about if I had the time would probably have been Elder Scrolls V. In my opinion the Elder Scrolls Series is the heir to whatever crown Ultima wore. Technologically it picked up where Ultima Underworld, UWII and Ultima's V, VI, and VII left off - with Ultima V being the Empire Strikes Back or the series (more on this later).

But this is not a review per se of Skyrim. Rather in reading and hearing about it I was struck with an interesting piece of info: The region of Skyrim is roughly the same size as the region covered in Oblivion, which is around 16 square miles in area. Really? 16 square miles is 4 miles on each side. My 6mi hexagon obsessed brain immediately replies: "You realise that's all on one hex." The game is supposed to be epic -and from what I can tell it is- but, the fact that the whole thing would fit in a single hex boggles my mind. So I went and got a map of Cyrodiil the land covered in Oblivion I saw once in my internet wanderings just to see how much adventure (by location) you could cram into less than 1 6mi hex. The map is below, and it is too small to see here, so I suggest looking at it here. 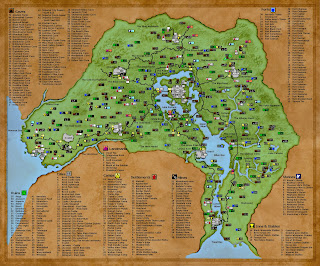 Places designated as cities on this map are actually more like citadels and walled towns- you can actually see their wall outline from the map. And a study of medieval settlement patterns indicates that the distances and frequencies of these in relation to each other is entirely believable. Counting each city area as a single location this map displays 89 caves, 50 forts, 15 Shrines, 16 Inns and Stables, 23 mines, 30 settlements, 31 camps, 12 cities/castles/walled towns, and 50 ruins for a total of 316 or more distinct locations. Granted many of these locations stack into way to lend verisimilitude to a quarter of a square mile. If you start walking and walk for 4 miles in the game it will take you about the same time as if you walked 4 miles in real life. Ad to it all that this is the area surrounding a major city. Also there is a representational telescopeing -a sort of illusion that tricks the video game player into feeling like there is a cast of thousands when there really is just several hundred- but my point is that when played the area seems realistic in the frequency of encounters and the amount of travel someone needs to do in an adventure.

My own stocking of a six mile hex pales in comparison. Granted I don't have buckets of money from a major video game studio and a team of people designing adventure locations- however the OPD contests and similar collaborative efforts in the OSR, not to mention the wealth of relocatable locations published in the tabletop gaming sphere (Dyson Logos alone give you a lot of maps) put similar levels of detail in the grasp of pretty much any DM.

Looking at things like google or bing mapping programs really shows how you could have several adventure locations in just one 5 or 6 mile hex and it be completely believable. This stats me wondering about the implications of a sandbox- perhaps the 1 mile hex might be more conductive. Additionally if a DM wanted to link several worlds in a setting that crosses time and space perhaps all they need do is detail the 6 mile hex around the entry point to that world. The complication arrives when the entry and exit are not in the same place. Certainly information like this makes me rethink the range that adventure needs to be epic and yet still a sandbox.
Posted by Steamtunnel at 3:22 PM

This sort of thing fascinates me, because I have almost no sense of distance.

It's true; I've lived in this area of town for 19 years but ask me what's a mile away from my house and I can only name two places...because I looked at the odometer in my car when I drove to them.

Mornings, I take the highway to work. It's a pretty straight shot. I've been taking that same route close to a year, but I still can't tell how far I've gone without looking at the odometer. Otherwise, I have no clue.

Eeeeh. Not good! Need to have more map awareness. :) @steam: The power of the hex is never to be underestimated. You can always make a couple of them empty and let the players interact with each other, and then surprise them with something big!

First off, you have random tables to fill out most of this. I haven't played ES5 but from playing Arena through Morrowind I feel like most of those little quests and side adventures and caves could have been represented by random table output and geomorphs.

Second, a LOT of that area should be relatively boring farmland and grazing land. Again, while I haven't played ES 4-5, ES 1-3 had almost no farms and it would have been impossible to feed the hundreds of NPCs on the produce of said land.

Finally, we're talking about a game that details every damn thing.

If you look under a table there will either be a bowl there or not, because the game mapped it out ahead of time. That's too much detail for a D&D game.

The game has the interior furniture of every house detailed. Too much for a D&D game.

I can run a village from scratch knowing only its name and terrain type (Let's say Grappleburg, Plains). Roll d%+100 residents, mayor is also the guy who owns the mill and his name is Elmore, there is a bad blacksmith and a fair carpenter, and the town focuses on shepherding and cleaning / carding wool. There's a small inn with 2d6 rooms, roll again to see how many are booked. Maybe there's a horse for sale. Small general store. 2d6 houses in town, everyone else lives in ranches.

I could write all that down for every town. My first pass at worldbuilding would be to draw the map and put the town down with the name, and if the PCs never made it anywhere near there that might be as far as it went. If I detailed the town, I'd draw a little map and write down that info that I came up with in 5 minutes. Unless the PCs were going to use the Grappleburg as their home base it would never get developed beyond that. But even if they did, it wouldn't ever get down to the level of contents of each peasant's underwear drawer like in TES series.

It's a vidja game with a different angle. You'd go mad trying to detail your game world that much.

Given the 8 mile hex (more common in D&D) encompasses 56 square miles and a D&D city can be up around 4 square miles that is a lot of landscape to adventure in.

The Problem is that When you get to the City of Brass (according to the story 3 days around by Camel) which occupies about three of those eight mile hexes that one mile hex you talk about becomes a full on poster.

Not directly related but I thought you might enjoy this post by one of the Skyrim designers (and a friend of mine): http://blog.shaneliesegang.com/2013/02/impressionist-gameplay/

To me the maps in Skyrim and Oblivion seem fairly large in play but depend on both the illusion of size (I think one's real eyesight can see a lot further then the Oblivion Avatar's)and accepting that the world is rather cluttered with things. One can hike for miles in settled rural places and not come upon much more then a rusted out car or a a road. In real wilderness it's just trees and rocks for days at a time.

In game context, you're absolutely right the density of Skyrim's encounters is far more exciting - I don't want to spend a three hour game session cross 1/2 a hex and encountering six honeybees, some deer scat and a large bay tree.

Personally I've kind of set aside the hex map (6 mile or otherwise) for pointcrawls because of this - one can easily say X destination is 5 days on foot from Y, offer some routes and roll on the random tables as the party plans the adventure - with say a 50% of encountering something interesting each day/night cycle. This makes wilderness travel more episodic then a hex crawl, but it offsets the need to build a very dense set of hexes for me.