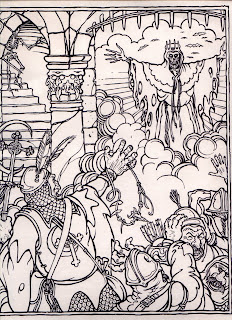 Real quick: JB over at B/X Blackrazor has been talking a bit about clerics. Mainly its about how they really don't work given the source material that D&D draws on, and how the game might work better if they were removed. Delta figured this out way back in 2008. And his reasoning was my main inspiration for banning the cleric in my own OD&D house rules.

Its odd that we both were thinking about cleric banning at the same time. I was revisiting my decision to answer the question of "what 5 things would you change in D&D if you could only change 5?" I have said before that we live close enough to each other that we are drinking the same water.

The really interesting thing here is that JB is coming very close to the same line of conclusions as Delta but I am pretty sure he is completely unaware of Delta's work and reasoning. Maybe not. But including this blogger, that makes three guys in the OSR that have outright removed clerics from the game. Which makes me think we are on to something here. Both these guys make the points for me so I won't put them up here. Check out the posts linked above and draw your own conclusion. For me, I think the Thief has more right to be in the game than the Cleric. So I think we should kill the cleric. And take his stuff. Delta chose to just nix the cleric spells all together. I chose to give them to the magic-user since he was now going to be pulling insane priest duty for the foreseeable future.

What I realized reading JB and rereading Delta was that my solution for what to do with turning made sense but was inelegant. I gave everyone the ability to turn. It made sense, if you thought about it. Turning is based on vampire lore and more specifically Van Helsing's use of a cross in Dracula. Note however that Van Helsing is not a priest. He is not ordained. He has a sum total of 0 supernatural power. So in my book that means that everyone can turn. The mistake I made was that I gave everyone access to the chart. What a mess.

First off the turning mechanic is really clunky and a little fiddly to apply. This obviously varies with edition, but you catch my drift. Secondly applying it to everyone made it even more clunky in that you had to figure out how to determine at what power level the characters turned undead. Work. Work. Work.

Here it is: If you must be rid of that meddlesome priest, make vampires superstitious.


Holy symbols of any faith keep Vampires (and only Vampires) at bay. Anyone can hold up (or wear while facing) any symbol of a god and the vampire won't touch them. However the symbols are directional. So while Count Dracula in front of you is held at bay his minion vampire behind you is not.

This way you get the ability exhibited in the source material but you don't have to worry about clunky mechanics. What about the other undead? There is no pre-D&D precedent of priests holding other undead at bay, and undead are meant to be feared. Turning is really powerful and thus it is like healing: it is something a party can't go without if it is available in the game. Take out turning and the fear of undead returns.
Posted by Steamtunnel at 10:14 PM 5 comments: 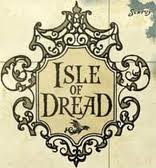 Legendary. That's the word. Not only in the numerous gaming worlds it inhabits, but also in our own real world the Isle of Dread is a thing of legend. It sits beside the Caves of Chaos and The Tomb of Horrors in the shared experience of D&D players of every edition.

The island is a strange eclectic mix. Start with one part homage to King Kong and the lost world literature that inspired it. Add stories of magic, pirates, castaways, mysteries, dungeons and of course dragons. Sprinkle with a bit of Sword and Planet and you are all set. Going to "The Island" is supposed to be a game changer. Arrival is easier than departure, and survival is always in question. As a location based module the adventure contained within the pages is perennial not just as an adventure but also as part of the lost world genre.

In recent years "The Isle of Dread" has reentered the field of vision of players and publishers alike. with expansions, retcons, retoolings and such found in Dungeon to ideas in the OSR, I wanted to try to tie it all together in this post so as to create a resource for information and ideas about the "The Isle of Dread" and to further develop notions about what the island is and what it could be.

First off I think the mistake that many writers and Dungeon Masters make when they try to use the "The Isle of Dread" is that they don't see it or populate it as a campaign setting. This mistake is an easy one to make, especially if you are not aware of geographic scales.  When we look at the map we think we are looking at something along the lines of a smaller Hawaiian island - or some small island  in the Carribian. We think Treasure Island, Skull Island, Jamaica and Gilligan's Island. We just don't see it as the the size of Ireland.

When you look at the map and count out the length and width of the outlying islands and reefs surrounding the main island, you get an area pretty much on par with Ireland. The actual Isle is about the size of the Dominican Republic and Haiti, or twice the size of Vancouver Island (which is longer than the western coast of the state of washington by the way). In truth, to really use the Isle of Dread is a major commitment. It's a very specialised campaign setting so given its size it might be best to treat it like one.

When it was left on its own in 1983 the Isle of Dread was just an island in the known world. 21 years after we see an update in Dungeon #114 that brings the Isle to Greyhawk. This creates the first new notion about the island - it moves from plane to plane.

This propagates the idea that we actually don't have to use it as an insular setting (with all the puns intended). We can make it far more interesting as a plane hopping island that touches other worlds and the planes themselves. In essence you have an island that can be the best of pulp adventure in one place. If skull island from King Kong is the conceptual father of the Isle of Dread, a strong argument can be made that it is the grandson of Neverland- native tribes, pirates, skull shaped rocks, and everything else that comes with the island that can only be found if you go straight on till morning and follow the second star to the right.

So the isle of dread is in essence an amalgamation of all the mysterious islands from pulp and lost world literature and fantasy. But I would wager that the ideas about this island have not stopped, but that it continues to develop.  For me the most recent inspiration for an addition to the Isle of Dread is the television series LOST. In LOST you have an island not unlike the isle of dread and its adventure fiction cousins. Mystery and magical realism abound. Most of the concepts in LOST we have seen before and can easily move to the Isle of Dread. But the one real innovation was an island that moves in time and space.

So I like to imagine the Isle of Dread as this plane walking, time and space traveling island. It manifests from prime material to outer plane and back again fluctuating through time and all existence, picking up horrors, and strange things. A sort of mobile Carcosa. When it manifests it is surrounded by storms that draw in ships that get too close, like a hurricane that forces everything it touches into its eye. It stays for a time, often long enough to get on the charts, then it disappears to a different time and world, taking the sea of dread with it.

Given what we have learned about the 6 mile hex and how big the Isle of Dread really is, it turns out that we can put A LOT more on the island. Thus it becomes tempting to add in WG6 The Isle of the Ape. Since the natives come from the isle of dread, and both are inspired on some level by Kong's Island, why not just make them the one and the same. Imagine Castle Greyhawk not leading to the Isle of the Ape as a part of its dungeons but in those places it connects to the Isle of Dread itself. Imagine that combined with the Isle of Dread as a demi-plane that wanders around and is connected to Castle Greyhawk and numerous other dungeons like the Cavens of Tharcia. If you think about it, there are some planer doors in Thracia- a couple are not functional.  Why not make one of the broken ones lead to the island?

Using the Isle of read this way, you have a dungeon nexus. A way to plane hop, a way to get your retro stupid on. Here are some resources to help you with makeing your "Ultimate Dread:"

Adjunct Sources and connections: (possibly take these and put them on the island. Really, why not?)
Isle of the Ape
Drums on Fire Mountain
Savage Coast(?)

Hidden Shrine of Tamoachan (Dungeon magazine played with this in the savage tide. They didn't put it on the island but it does bring up the question again - why not?)
Dwellers in the Forbidden City - could easily work as a location on the Island.

Caverns of Thracia (like I said before, one of the planar doors could connect well to the island)