A couple of other design goals...

Today I made my first 4e character, based on Dirk the Daring from the DragonsLair laserdisc game: 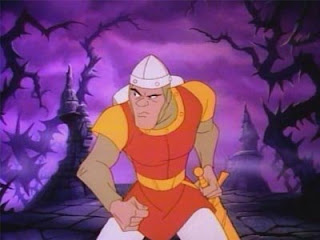 The thing I noticed about 4e is that while the mechanics were a lot smoother, the arrangement of the information was not helping with the process. Making the character and writing it down on a blank piece of notebook paper took an hour and a half. Now that I know the process I will beable to make a character faster.

Thats all to say that while I was doing this I realised two more design goals for Codex:
So once we have the rules for Fighters in Codex the method to make a fighter should always be the same, unlike other RPGs where they are significantly different from edition to edition. This is to say that an edition change should not make you have to a) convert your character or b) reimagine your character. The stats with very minor tweaks should just work.
4e does rock on its own merits. One thing I really liked was that if you really wanted, you could have a fighter who is trained in Arcana. Perhaps my next character will be a ranger or fighter or paladin or warlord who hunts necromancers...
*Why such a specific size? Because I have decided that digest format rocks on toast! Everyone remember this: 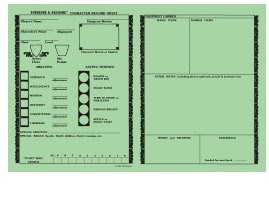 Yeah, me too! Characters at first level used to fit onto this. On the back of the 1981 Red Box players guide you had one of these there. It was small. You could fold it in half and it contained a whole character. You can fit your character into the first half of this (the second was all money, and gold and equipment and stuff). How cool was that!? More about the digest format later!
Posted by Steamtunnel at 5:35 PM No comments:

A bit about Codex

I was going to call it Sword & Spell. But then I thought about it- almost every retro effort calls itself something & something. While it is a D&D derivative, I find it to be different enough (almost alien in some respects) that I really don't think that it needs a name in any way similar to D&D. Here are some design goals each loaded with meaning:

1. Rules Lite but not limiting
2. Portable, not too many books, less than 10lbs.
3. A complete game in one purchase
4. Able to be easily expanded by those that play the game

Because it is so small and simplified, I have decided to make changes to MicroLite20 and expand on it to create a rules lite system. I suspect that only a vestige of the original will remain but it will make a good scaffolding.
Posted by Steamtunnel at 2:20 PM No comments:

At least for this blog. The project covered here had its beginning in 2004-2005 with the advent of D&D 3.5's Unearthed Arcana, Castles and Crusades, and WFRP2. UA was where I started tweaking the rules of d20 and as a result came up with a some new philosophies about game design (new to me at least). C&C and WFRP2 laid the ground for some other ideas that have been gestating for the last 3-4 years and with 4e D&D they are now building themselves inside my head into a game I have decided to call Codex.


But this blog won't be just about Codex development.

Some things I plan to discuss:

Posted by Steamtunnel at 1:41 PM No comments: